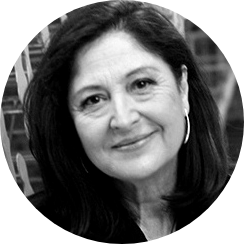 Christina Sarantopoulou was born in 1952 in Agrinio, Greece. She studied at the Athens School of Fine Arts in 1971 in the department of sculpture under the supervision of Dimitri Kalamara. In 1978 she lived in Paris and attended classes on art aesthetics at the University of Sorbonne.

Many of her big scale sculptural installations belong to private collections, municipalities and museums. She has been profoundly interested in kinetic sculpture since 2000, creating a number of kinetic artworks.

Reflections on human existence': this might be a possible description of what Greek sculptress Christina Sarantopoulou, uses as building blocks in her work.

Saradopoulou creates sculptural 'landscapes', site-specific works and installations whose form emerges as an elaboration of the pattern of the human fingerprint and the proportions of the human body.

Saradopoulou's sculptures combine narrative and abstraction, since sculptural form in her work is based on the chaotic and labyrinthine pattern of the fingerprint that has been a constant source of inspiration through her sculptural investigations.

2009 “With Red or White”, Macedonian Museum of Contemporary Art, Salonika,Greece

1985 Award “National Resistance Monument” by the Municipality of Korydallos, Athens

1998 Second Prize in the contest for monumental sculpture from the Ministry of Culture and Education, Nicosia, Cyprus