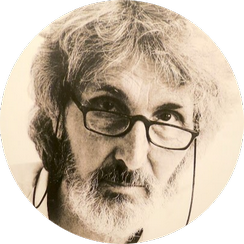 Sotiris Sorogas was born in Athens in 1936.Studied at the Athens School of Fine Arts and graduated in 1961.As a student in 1958 he received a scholarship from the National Royal Foundation to study post-Byzantine and folk art and for some years after his graduation he made a living as a painter of religious icons.

In 1972 he had his first exhibition with the title ‘Notes from Greece’ at the Athens Art Gallery dedicated to the poet George Seferis. The same year, he received the annual Ford Foundation Scholarship and spent a year studying temporary art in the New York, Chicago, London and Milan. He held many solo exhibitions in and taken part in a multitude of group exhibitions in Greece, and has been represented at international events organized by the Ministry of Culture, the National Gallery, the Pieridis Gallery and by private art galleries (Tokyo, Brussels, Dublin, Sao Paolo, New York, Paris, Rome Basle etc). He taught drawing and painting at the Architecture School of the National Technical University until 2003.

Today he is an emeritus professor. He was a founding member of the Group for communication and Education and a member of the editorial board of the art theory journal, Speira. Studies, articles, reviews and three monographs have been written about his work. His paintings are in the National Gallery of Athens, the Pierides Gallery, the Teloglion Museum of the University of Thessaloniki, the Goulandris Museum on Andros, at the ministries of Culture and Foreign Affairs, at municipalities, communities, banks, organizations and many private collections in Greece and abroad. In 2004 he was honored by the Athens Academy for his contribution to art. He lives and works in Athens.